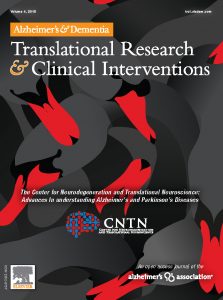 Biomedical research progress depends on appropriate infrastructure, funding, and expertise. Progress must include both advances in understanding of disease processes and their treatment and in training the next generation of investigators to ensure future progress toward the goals of optimal health, wellness, and dignified longevity (Fig. 1). Brain diseases pose a significant threat to human well-being, limit human capacity and autonomy, and take a great toll on the world economy. In the United States alone, symptomaticAlzheimer’s disease (AD) affects 5.3 million, and 2.2 million have other forms of dementia— accounting for 7.5 million affected individuals or 7.4% of the population [1]. Preclinical and prodromal forms of AD—often unrecognized and undiagnosed—nearly double the total number of affected individuals [2]. The elderly are particularly vulnerable to neurodegenerative and vascular brain disorders; AD, Parkinson’s disease (PD), dementia with Lewy bodies, vascular cognitive impairment, and mixed vascular– neurodegenerative disorders are all disproportionately common among older individuals [1,3]. Scientific programs aimed at reducing occurrence of diseases that impose a significant burden on society must address neurodegenerative disorders (NDDs). The accompanying suite of articles in Alzheimer’s & Dementia: Translational Research and Clinical Interventions describes progress in establishing infrastructure and expertise to address the challenges of AD and PD. The role of the National Institute of General Medical Sciences (NIGMS) Institutional Development Awards (IDeAs) in supporting research infrastructure and growth of research expertise is highlighted. 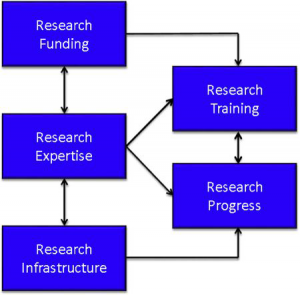 Fig. 1. Research environment consists of expertise, funding, and infrastructure that leads to scientific progress and training.

The Lou Ruvo Brain Institute was established in Las Vegas, Nevada, in 2007 with scientific leadership by Zaven Khachaturian, PhD, and operational leadership by Ara Khachaturian. In 2009, the Cleveland Clinic assumed responsibility for the clinical programs of the renamed Lou Ruvo Center for Brain Health (LRCBH) under the guidance of Jeffrey Cummings, MD, ScD [4]. Clinical programs in AD, PD, and multiple sclerosis were initiated with an emphasis on expert clinical care, patient-centered care delivery, broad support for families and caregivers, and clinical trials of experimental medications. A brain-imaging program with expertise in magnetic resonance imaging (MRI) and positron emission tomography (PET) was established.

In 2015, the CCLRCBH established a collaboration with the University of Nevada Las Vegas (UNLV), including the UNLV administration, the leadership of the National Supercomputer Institute, experts in biostatistics, animal model researchers, genomic investigators, and leaders in program assessment. The collaboration focused on translational research in AD and PD and was funded in 2015 with an NIGMS Center of Biomedical Research (COBRE) award (P20GM109025) that inaugurated the Center for Neurodegeneration and Translational Neuroscience (CNTN) as an LRCBH-UNLV collaboration. The COBRE program is one of the National Institutes of Health (NIHs) IDeA’s three major initiatives to establish multidisciplinary research centers in states that historically have had low levels of NIH funding. The IDeA program funds only merit-based, peer-reviewed research that meets NIH research objectives in the 23 IDeA-eligible states and Puerto Rico. The other two IDeA initiatives are the IDeA Networks of Biomedical Research Excellence (INBRE) program and IDeA Clinical and Translational Research (IDeACTR) Awards. The COBRE awards can support up to three phases of funding from inauguration of scientific infrastructure, through successful support of investigators, to sustainability of the cores and mission with other sources of support (Fig. 2).

As a COBRE program, CNTN represents a comprehensive blueprint for advancing the careers of junior investigators in the area of NDD and promoting research vital to the nation in resolving the challenges associated with the burgeoning population of NDD patients. Here, research methods and infrastructure needed to advance understanding and treatment of AD and PD are described in the context of the functions of the CNTN. Funding is needed to fuel AD research, and the sources of funding are described by Dr. Cummings, Dr. Carl Reiber, Vice Provost of UNLV, and Dr. Parvesh Kumar, Vice President for Research of the UNLV School of Medicine and Principal Investigator of the Intermountain West IDeA-CTR Infrastructure Network. They emphasize AD drug development as a critically important and necessary aspect of the AD research enterprise which is required for finding therapies to prevent or delay the onset, slow the progression, or improve the symptoms of AD. In “The Price of Progress”, they describe the federal funding, private capital, public private partnerships that comprise the financial ecosystem necessary to achieve improved therapy.

Scientific systems require assessment and reiterative adjustment to achieve optimal success. The science of research assessment is underdeveloped and has recently come under scrutiny as a high rate of irreproducible observations in both clinical and preclinical research has been documented [5]. The need for rigorous approaches in training, mentoring, and program assessment is described by Dr. Gwen Marchand. She describes novel network analyses that document the growth of collaborations and research networks. Data science is growing at a rapid rate, and bioinformatics expertise and infrastructure is critical to the success of nearly every scientific enterprise [6]. Capturing clinical data regarding the disease phenotype; integrating clinical, imaging, and biomarker data; making carefully curated data available to many investigators while protecting patient confidentiality; and mining data for new discoveries are all critical aspects of data management described by Dr. Justin Miller and Joe Lombardo. Statistical analyses of data and advancing new means of analyzing natural history and clinical trial data complement data management, and advances in this domain are described by Guogen Shan, PhD.

Longitudinal natural history studies have become increasingly important in defining the expected course of AD and PD, identifying subgroups, and improving differential diagnosis. The Alzheimer’s Disease Neuroimaging Initiative, the database of the National Alzheimer’s Coordinating Center, and the Parkinson’s Progression Markers Initiative are examples of natural history studies that have been highly informative [7–9]. Surprising observations have emerged from the application of new technologies in these longitudinal cohorts. For example, the high number—around 25%—of individuals diagnosed with AD who lack the amyloid plaque pathology needed to support the diagnosis has impacted AD research of all types [10]. The strong correlation between apolipoprotein E v-4 genotype and the presence of amyloid plaque has also been an important learning [11]. The structure of the CNTN includes a longitudinal cohort of individuals with AD, PD, or normal cognition. These populations undergo deep phenotyping with neuropsychological and clinical assessments, MRI, and amyloid PET. The structure is unique in including an expanded Alzheimer’s Disease Neuroimaging Initiative neuropsychological battery for both AD and PD as well as the normal elderly individuals. The cognitively normal individuals are imaged by amyloid PET to determine if they are amyloid- bearing and at high risk for development of symptomatic AD or not. Dr. Aaron Ritter, Director of the Clinical and Translational Research Core, describes this cohort in the context of other on-going longitudinal studies.

Another key tool to support translational research is collection of biological fluids (plasma or cerebrospinal fluid) for the study of various types of “omic” information including genomics, transcriptomics, proteomics, lipidomics, and metabolomics [14]. Genomics uses advanced sequencing technology and informatics to unravel the human genomic profile in health and disease. Genomic studies can assist in identifying multiple genes pointing to specific pathways in which interventions might be able to impact a network of interacting pathophysiologies [15]. Dr. Martin Schiller, a key UNLV collaborator of the CNTN, discusses genomics as an important means for advancing understanding and treatment of NDD.

The core structure of the CNTN is built to support multiple individual projects led by junior investigators (Fig. 3). Currently, three projects are supported, and more projects will be supported over time as hypotheses are resolved and new investigators are attracted to the center. 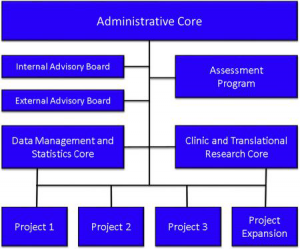 Fig. 3. Structure of the Center for Neurodegeneration and Translational Neuroscience (CNTN). Three cores—administrative, data management and statistics, and clinical and translational research—serve the three projects. The assessment program reiteratively assesses all aspects of the
enterprise. The internal and external advisory boards review the center semi-annually and report to the Administrative Core and to the National Institute of General Medical Sciences (NIGMS).

The NIGMS has the development of the nation’s scientific workforce as a key part of its mission. This includes development of skills in junior investigators [20], attracting an ethnically diverse population of scientific researchers, insuring opportunities for women in science, and advancing scientific infrastructure in states that have historically had limited access to federal funding. The combination of funding, infrastructure, and expertise leads to the key products of new scientific information and the training of new investigators, thereby addressing current problems and creating a sustainable pipeline of researchers for the future (Fig. 1). As CNTN is currently in the phase I of its COBRE funding cycle (Fig. 2), the center is solidifying the foundation in preparation to compete for the next phase. These IDeAs programs and the COBRE award supporting the CNTN are noteworthy examples of initiatives supporting infrastructure development to advance the scientific and training agenda.

The authors acknowledge support of a COBRE grant from the NIH/NIGMS (P20GM109025) and Keep Memory Alive.